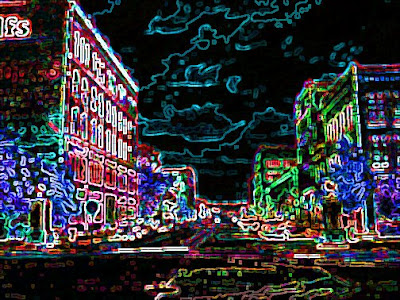 (Sioux City)
Today, a total disaster. All because I decided it was time to get the fuck out of Sioux City now--nothing here for me anymore.

I got into a huge fight with Mo this morning about some dirty dishes I left in the sink last night. Big deal--I was going to do them this morning, but I wasn’t about to do them after that old bitch yanked me out of bed at 6:30 a.m. and called me a dirty, lazy hippie whore.

Who needs this abuse?

“I’m getting the fuck out of here,” I said, struggling into my jeans, sweater, and shoes. I grabbed a travel bag and threw in my diary from high school, all my letters from Jeff and Pam, and a change of clothes. What else did I need? In Pennsylvania, I could get a job and buy all the clothes I needed--I just wanted out of here, big time. Now.

I slammed the front door behind me and headed for the downtown bus depot to buy a one-way ticket to York.

Dee followed me, and we got into this huge fight, right in the bus station.

“Let’s see what the police have to say,” I said.

As we stepped into the police station, a short walking distance from the bus depot, I knew immediately I had made a huge mistake.

That police matron wouldn’t even listen to me; instead, she had me locked me in some tiny room while Dee Dee told a bunch of lies. They told me only one thing: tomorrow, I’m scheduled at the courthouse for some hearing to determine my sanity.

I wish I could reverse the clock.

Home and Index/Table of Contents
*
Posted by Jennifer at 3:35 PM