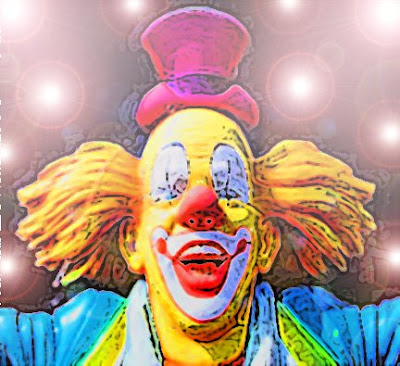 We drop some Blue Cheer–yeah, I am going to put down for good–just one more trip...

Stoney undresses; we try making love, but it just isn’t happening. On the way home, he visited some dealer friends and shot up heroin. God, I hate that stuff. How can anyone enjoy shooting up a drug that makes you stupid? Heroin addicts just lie around, drooling and slurring their words–no fun at all, human door stops, always passed out.

Stoney’s drug dealing friends show up; everyone’s a clown, I’m in a roomful of clowns, red cheeks and noses, white pancaked faces, all in clown costumes, with ruffles around their necks, hands, and feet. Big curled up shoes and psychedelic wigs the color of rainbows, and they’re all singing "See the Funny Little Clown," some cartwheeling all over the place, others balling up bread bags, setting them on fire, and dropping the sizzling balls to the rug.

Even the naked clowns still wear their shoes, ruffles, and wigs, even as they make love with other clowns...

Index/Table of Contents
Posted by Jennifer at 5:06 PM