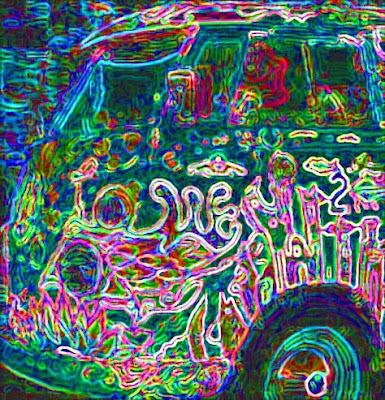 -
(December 1968)
Stoney and I look at a VW van. I found my old savings passbook from Sioux City: cool! I still have $136.14 left. We need two or three hundred yet. If we don’t get the van, then maybe I’ll use the money to visit Big Brother in Pennsylvania.

I love Stoney, but I’m sick of being stoned all the time. If I’m not wired, I’m in a daze, always tired and feeling shitty. And the dope is getting scary; last week, we smoked some grass cured in embalming fluid. I passed out.

No more dropping acid three and four times a week. On Christmas Eve, I almost flipped out on that blue shit; ever since, I’ve been having flashbacks. Having a good time for 12 hours or so is one thing, but freaking out when I haven’t dropped anything is totally scary. It’s freaky when you’re at work and start tripping for no reason.

I’m glad I quit that stupid job–I hate that bank and those stuffy people; I don’t give a fuck about who gets a loan for a Toyota or Ford.

After we look at the van, Stoney drops me off at the apartment and leaves to score some mescaline for New Year’s, says he’ll be back in an hour or so.

John Steinbeck died about a week or so ago, and I just found out. I liked The Grapes of Wrath, even though I had to read it for high school.

Excerpts may not be used or copied without author’s permission

Index/Table of Contents
Posted by Jennifer at 5:12 PM