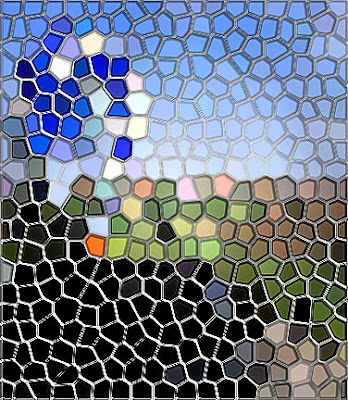 (Sioux City, Iowa)
Summer 2004 has been extremely busy; getting ready for a year in Eastern Europe has been daunting and confusing. Many changes have taken place in Macedonia since Jerry’s last Fulbright there 16 years ago, including its independence from Yugoslavia, but we don’t know exactly what that means, so we’re not quite sure how to prepare or what to bring with us. Our good friend Liljiana Ordev and past Fulbrighters have assured us that most goods are available and that internet connection, while expensive, is up and running, but we keep thinking back all those years when the communists were still in power and about the stark socialist gray of the urban landscape–-when many goods were scarce and inflation 100% a month. So, in our minds, we carry this history.

In late May, after a difficult school year, we went to Daytona Beach for two weeks to read AP essays; in June and July, nearly every day spent doing a task connected with this trip; in mid-July, the Fulbright orientation; in late July, Jerry’s surgery and two weeks for recovery. I have spent January through July getting my short story collection ready for publication, finally released in late July.

“I don’t know if we’ll have time for Sioux City this year,” Jerry said, just before the orientation.

“We’ll have to find time,” I said, slightly pissed off; after all, we have devoted most of the summer to this Fulbright, his Fulbright. I just wanted these two weeks for me.

“Okay, I’ll try to schedule some time in August,” he says, a note of exasperation in his voice.

“I could always go alone.”

Don’t do me any favors.

I feel slightly resentful toward Jerry anyway; I need to promote my book, but I can’t really do so until we return from Macedonia, and, by that time, it may be too late. Europe isn’t exactly a hot marketing spot for a collection of short stories about a fat woman.

Also, I will miss the late November birth of Rhia Alden Brown, my granddaughter–that, more than anything else, makes this year away feel all wrong.

But I knew that this Fulbright was a possibility before embarking on publication and certainly before Priscilla, my daughter-in-law, became pregnant.

Jerry does make the time for Iowa–-his concession for dragging me off to Macedonia.

As much as I wanted to escape Iowa in 1969, I need her now, especially since I soon will be living halfway around the world.

On many levels, this trip to Iowa has been important. Aside from the obvious visiting of family, going to casinos and races, antiquing and shopping, and just plain lounging around, this year’s visit feels slightly different. First, I wanted to show off Are You EVER Going to be Thin? (and other stories) to family-–perhaps set up some readings at local bookstores.

The family is only slightly impressed and the bookstores not at all.

Such is the self-publishing life.

I also needed to get my court records; I don’t even know if this memoir is possible at all, but I know it won’t be if I don’t have those records–-I need to know who committed me to Cherokee. For the past 35 years, this has been an unsettling mystery. Mo and Dee Dee would never talk about that time, except, perhaps, in fits of anger, when Mo would flat out say that I needed to be committed and suggested that, perhaps, I had signed myself in.

Fortunately, the letters, which I have photocopied and brought with me, offer a specific date-–February 19, 1969–-that I was committed, the same day the court papers would have been filed. We arrive in Iowa on the 18th; on the 20th, Jerry and I go to the courthouse, but the records office is closed because of a state budget holiday. We go again on Monday, August 23; now I have to wait a day while they retrieve my records from a vault. I also have to show my passport, proving my identity–-these are not criminal records, and, therefore, are not covered under the sunshine laws. The clerks simply want to make sure that Jennifer L. Semple’s privacy is protected and that I’m really Ms. Semple, who does have the right to see her commitment records. They photocopy my passport front page.

The next day, they call, and I return to the courthouse, have the pages photocopied, and pay a small fee.

What I find in those records regarding my commitment is a complete surprise.

We’re staying with Lyle and Colleen Baker–legally, she’s my sister, but, in actuality, she’s my aunt, my natural mother’s sister–-and they were close.

I have broached the subject of this book with Colleen; I get the sense that she’s uneasy about the possibility. In 1969, we had a falling out because Colleen took Mo and Dee Dee’s side, and I’m not anxious to have a falling out in 2004. But she and other family members need to understand that I must write this book and that I will be harsh in my treatment of Mo and Dee Dee, especially Mo. I will not be kind to my mother, either.

Colleen doesn’t remember much about the events leading up to my commitment. She was overwhelmed with raising her five kids, the oldest five years younger than me; while I was in the hospital, we had no contact, and I don’t remember seeing her during my trial visits home. Lyle didn’t even know about my commitment until I told him, on August 20, why I needed to visit the courthouse.

“This family keeps a lot of secrets,” he said, shaking his head.

“I pretty much kept this one to myself,” I said. “But I thought you knew.”

Lyle shook his head. “No one tells me anything.”

To answer “yes” would have ended any possibilities for employment–-no one wanted to hire a potential wacko. And to explain would have meant that they could have access to my hospital records, and I had no idea what those records would reveal. At that time, I had no idea that I, too, had the right to a copy of “Mental Health Records: Patient #29109.”

So I always answered, “No,” and kept my fingers crossed, hoping that no one would find out.

Now I tell complete strangers my story–-the short version, of course. If they want the long version, they can read my book.

As we leave for York, Pennsylvania, I feel a pang for Sioux City, a place I will soon eviscerate cruelly with my computer keyboard.

Copyright 2008, Jennifer Semple Siegel. "Preparations" may not be republished or reposted without permission of author.
Posted by Jennifer at 9:07 PM