Out Take: "Cherokee, Iowa--Three Challenges in Search of a Triumph" (Essay) 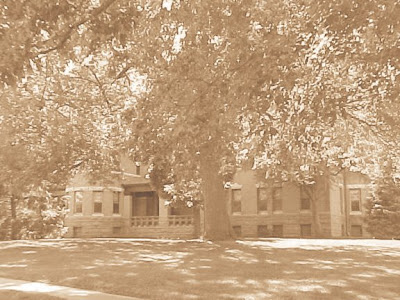 This short essay--along with 350+ other pages--did not make it into the final version of I, Driven: memoir of a teen's involuntary commitment. I plan to post some of these "out takes" on this website.

In late September 2004, I traveled to Skopje, Macedonia, where I would spend the 2004-2005 academic year with my husband Jerry Siegel, a Fulbright Scholar.

The plan: to write this memoir.

I had lugged photocopies of articles, letters, and hospital and court records across the ocean.

In my carry-on bag.

After recovering from jet lag, I, not quite sure where to start, sat down at my laptop.

I needed to figure out my purpose for writing this book:

February 1969: Woodbury County, Iowa, committed me, an 18-year-old hippie chick, to the Cherokee Mental Health Institute. At a competency hearing in Sioux City, I admitted to using LSD–evidently enough testimony to force an involuntary commitment.

I had not been convicted of a crime.

I have a story, but how compelling is it? Technically, my imprisonment was inconsequential. Designated as a “screening center patient,” I was tested and warehoused while my psychiatrist lobbied for my release; then, after two months, I was discharged.

But those months represent a bubble in my life–-time itself stopped and expanded far out of proportion to actual time. I was livid, my anger at “The Establishment” palpable and constant, persisting for years and affecting the course of my life. No matter how minute, it was still time not mine.

I must write about Cherokee.

How much of my story do I remember? Letters between my ex-husband and me during my commitment help fill in major gaps, but how will I contend with the drug-crazed Hollywood months leading up to it? I remember major incidents, but details are hazy. Do I fill in with supposition? If so, is this part of my memoir still memoir, or is it fiction?

I will disclose this part of my life. I’ll face whatever consequences befall me; however, my family and friends have not chosen to have their past lives sliced opened and bled.

I’ll change most names and minor details about people. Nonfiction purists may claim I have skirted the truth, but what, exactly, is truth? Yes, this memoir will slash open psychological wounds and expose them, but also minimize inflicting pain on others. I have a moral and, maybe, legal obligation to protect identities, especially those of other ex-patients and ex-hippies who may have indulged in youthful indiscretions.

I’ll use my ex-husband’s actual name, an issue faced head on: I'll present to him an unfinished draft, and I’ll show him every subsequent draft and final product. I’ve read horror stories about ex-lovers, parents, siblings, family, and friends being blind sided by published memoirs, their secrets exposed, without any warning. Who could blame them for being upset?

Before embarking on my ex-pat life, I had told my ex about the proposed memoir; he didn't threaten to sue, though he expressed some unease about exposing our past drug use. We have an adult son, after all.

“But it’s a necessary part of the book,” he says. “It has to be in there. So I’ve been overruled.”

By sharing, I have offered him a voice in my project–-he may prove to be an important ally, instead of a bitter enemy.

Catharsis, to finally leave Cherokee behind, retracing, via the power of the keyboard, my past–-drug use, involuntary commitment, and eventual discharge–-revisiting 18-year-old Jennifer and attempting to make sense of what happened and why.