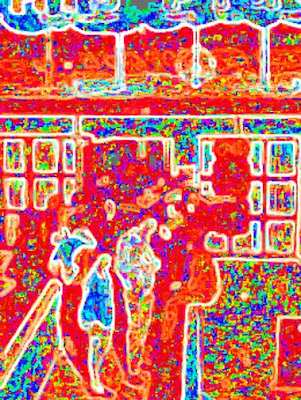 As Stoney, Jeff, and I prowled the strip, we ran into Wild Man Fischer, clenching a tape recorder, one of those portable Juliettes, blasting a song from his new album An Evening with Wild Man Fischer.

He shoved it under my nose and shouted, “Hear my song?”

Me and you can go merry go round!

It’s very easy, just go up and down!

“You wanna buy it? Only ten cents.”

“Not today, Wild Man. Thanks, anyway.”

A pest, but harmless--probably a rich pest. He fit his name; he was manic, always wound up tight, fast like a fly or hummingbird. He even looked manic: eyes practically popping out of his head, his hair, black and frizzy, stuck out at all angles. He wore a loud yellow shirt with blobs of red, orange, and green, and flip flops, though, sometimes, only one, even when it was cold. Plus, he was constantly running around the strip with that tape recorder.

I’ve heard that he’d spent some time in a mental hospital.

“I’ll play it again,” he said, pushing the rewind button.

“That’s okay.” We inched away.

I didn’t want to hurt his feelings, but he had a way of getting under your skin. And then he’d be off to the next group of freaks. They were all out tonight, unusual for a week night: Julius Caesar, drag queens, streetwalkers–a circus. We verbally sparred with Caesar, an old dude, his Roman soldier costume stolen from 20th Century Fox. He harassed tourists, the middle-aged straights who arrived on the strip decked out in Hawaiian shirts, Bermuda shorts, straw hats, and sunglasses, big clunky cameras around their necks, loud voices: “Hey, Herman, look at the dirty hippies.” Everyone was a dirty hippie because the straights couldn’t distinguish between groups that populate the strip.

Caesar yelled out his standard slogans: “LBJ is a necrophiliac; he digs dead dudes” and “All the way with LBJ; Lady Bird Johnson is a nymphomaniac.”

What a freak; his slogans angered many of the gawkers, who turned red.

Some even yelled back, “America: Love it or Leave it.”

Caesar paid no attention to the counter-yellers--like he was in a trance.