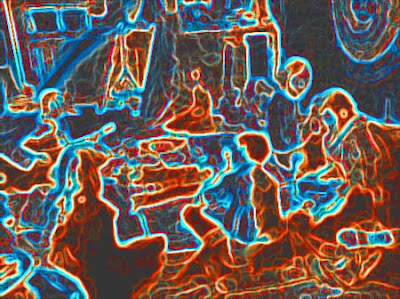 When Eleanor and I arrived at Rudy’s, Pam was already there with her new old man, a tall, about 6'5", Indian dude, like from India, with wide shoulders and huge brown muscles.

“This is Draino,” Pam, barely five-foot, said, tucked under his arm.

“I dreenk anything, hence the name.” He crushed Pam against him.

The party in full swing, Mel, Derrick, and some chick with them were stoned out of their heads. She looked about 15--no way should she have been at a party like this.

Eleanor and Derrick on the outs.

There were some new people here, too, my eye on a dark-haired dude across the room.

Rudy greeted me like I was his best friend in the world. “For the birthday girl, I have a special present.” He handed me a tab of multi-colored acid. “Rainbow. Supposed to be the best on the street.”

I slipped the Rainbow into my pocket. For later. I wanted to check out the dude across the room, who had caught my eye.

“We get together tonight?” Rudy slid his arm around my shoulder.

“Maybe later.” I slipped away. “Thanks for the present.” I found Pam, on the sofa, her top off, kissing Draino.

“Pam,” I said, tapping on her bare shoulder.

Pam sighed, disengaged from Draino, and threw on her top. “What’s up?”

“Rudy wants to ball me.”

“Not cool.” I nodded toward the dude across the room. “I want to meet him.”

“You don’t know what you’re missing. You’ve been anointed.”

“Look. The thing about Rudy, he doesn’t push–doesn’t have to. He’s got women lined up. He’ll get over it, maybe try again some time, but not tonight. Go to Prince Charming over there.”

I pulled the tab out of my pocket. “He gave me this.”

“Maybe I should give it back.”

“That’s another thing about Rudy–he’s not an Indian giver. Now, I’ve got a date with a super-stud. Split.”

I drew a deep breath and moved across the room.

Prince Charming smiled and introduced himself as Richard, but call him Rick.

I was drawn to this guy, his dusky complexion, brown eyes, and perfect teeth. He didn’t strike me as a true hippie--he was dressed too well and his hair was too short--but he was so gorgeous, and he was interested in me. He was already tripping, his pupils fully dilated, two black coals.

He could be the one.

I dropped my Rainbow.

Rick and I stayed up all night, talking and tripping–

A birthday sendoff, the best acid I’ve ever had.

Rainbow colors, dimensions, music that paints the sky with its broad strokes, fluid walls, incredible glittering trails flowing from our fingers and mouths, even our feet...Maybe some day I can describe an acid trip without stumbling over my own words.

Rick and I slow danced, swaying to the music, even fast hard rock, he growing hard.

“I want you,” he whispered.

He didn’t push, though I sensed impatient animal instinct, something sexually dangerous about him, like a panther, held back by a thin tether. That if I offered all myself, he’d rip into my body and consume my flesh, leaving behind nothing but a pile of bones.

We made out, French kissing and feeling each other up--each kiss reaching deep into my throat and down to my loins--

Each kiss a different color of the rainbow; a different note on the musical scale; each flick multi-textured: flutter, rock, hot lava, feather, pillow, sand paper, fire and ice .

He undid his belt and unzipped his jeans--no underwear. He thrust hard against my jeans, a shudder rumbling through him, me, the room, all of Hollywood, like a quake. He jerked upward and groaned. When he stopped, a warm wetness on my jeans. “Oh, baby.”

Too stoned to worry about the stain on my crotch.

Rick grew slack; we sprawled on the floor, he, apparently satisfied and calm, I relieved I hadn’t balled him. 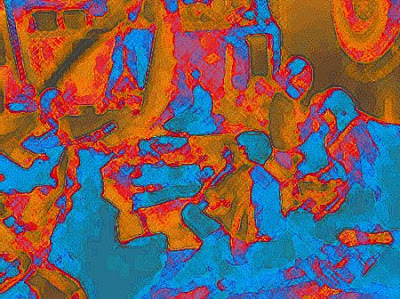 Home and Index/Table of Contents
*
Posted by Jennifer at 9:13 PM