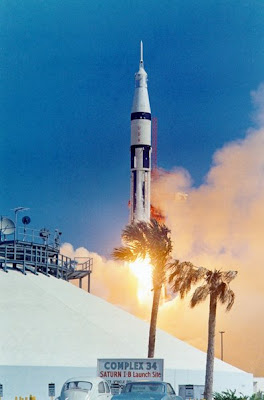 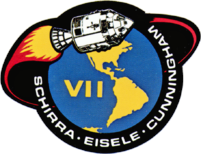 Apollo 7 was a confidence-builder. After the January 1967 Apollo launch pad fire, the Apollo command module had been extensively redesigned. Schirra, who would be the only astronaut to fly Mercury, Gemini and Apollo missions, commanded this Earth-orbital shakedown of the command and service modules. Since it was not carrying a lunar module, Apollo 7 could be launched with the Saturn IB booster rather than the much larger and more powerful Saturn V. Schirra wanted to give Apollo 7 the callsign "Phoenix" (the mythical bird rising from its own ashes) in memory of the loss of the Apollo 1 crew, but NASA management was against the idea.

The Apollo hardware and all mission operations worked without any significant problems, and the Service Propulsion System (SPS), the all-important engine that would place Apollo in and out of lunar orbit, made eight nearly perfect firings. 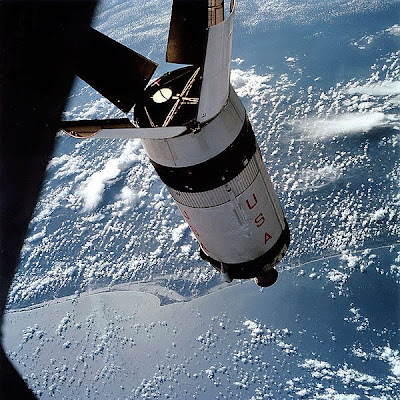 Even though Apollo's larger cabin was more comfortable than Gemini's, eleven days in orbit took its toll on the astronauts. The food was bad, and Schirra developed a cold. As a result, he became irritable with requests from Mission Control and all three began "talking back" to the Capcom. An early example was this exchange after Mission Control requested that a TV camera be turned on in the capsule:

SCHIRRA: You've added two burns to this flight schedule, and you've added a urine water dump; and we have a new vehicle up here, and I can tell you this point TV will be delayed without any further discussion until after the rendezvous.

CAPCOM: All we've agreed to do on this is flip it.

CAPCOM: All we have agreed to on this particular pass is to flip the switch on. No other activity is associated with TV; I think we are still obligated to do that.

SCHIRRA: We do not have the equipment out; we have not had an opportunity to follow setting; we have not eaten at this point. At this point, I have a cold. I refuse to foul up our time lines this way. ("Apollo 7 Air-to-Ground Voice Transcript," pp.117-118) Warning: HUGE download.

Exchanges such as this would lead to the crew members being passed over for future missions. ("Encyclopedia Astronautica") But the mission successfully proved the space-worthiness of the basic Apollo vehicle.

Goals for the mission included the first live television broadcast from an American spacecraft (Gordon Cooper had broadcast slow scan television pictures from Faith 7 in 1963) and testing the lunar module docking maneuver.

For nearly 30 years the Apollo 7 module was on loan (renewable every two years) to the National Museum of Science and Technology of Canada, in Ottawa, along with the space suit worn by Wally Schirra. In November 2003 the Smithsonian Institution in Washington D.C. requested them back for display at their new annex at the Steven F. Udvar-Hazy Center. Currently, the Apollo 7 CM is on loan to the Frontiers of Flight Museum located next to Love Field in Dallas, Texas.

Apollo 7 was the only manned Apollo launch to take place from Cape Canaveral Air Force Station's Launch Complex 34, as all subsequent Apollo (including Apollo-Soyuz) and Skylab missions were launched from Launch Complex 39 at the nearby Kennedy Space Center.

The insignia for the flight showed a command and service module with its SPS engine firing, the trail from that fire encircling a globe and extending past the edges of the patch symbolizing the Earth-orbital nature of the mission. The Roman numeral VII appears in the South Pacific Ocean and the crew's names appear on a wide black arc at the bottom.

The Apollo 7 Command Module is on display at the Frontiers of Flight Museum, Dallas, Texas

Portions of the Apollo 7 mission are dramatized in the miniseries From the Earth to the Moon episode entitled "We Have Cleared the Tower."

Index/Table of Contents and News Clips
Posted by Jennifer at 1:15 PM