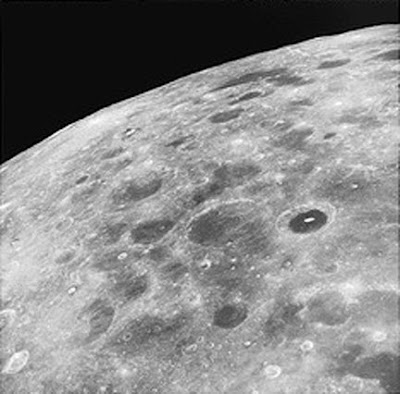 December 25, 1968
(Tenth revolution around the Moon)
Christmas Day, 89:22:34. On the far side of the Moon and out of radio contact with Houston, Apollo 8's Service Propulsion System (SPS) has been ignited to accelerate it out of lunar orbit.

Simon and Garfunkel's "Silent Night" on YouTube, by Vidiak

Stoney and I don’t come down until after three–we crash for a few hours. Then, about seven, we go to Cecil’s Stand for cheeseburgers and fries.

Later we exchange presents–he gives me a jade ring and a petrified wood ashtray in psychedelic colors; I give him a blue rock. Both from The Crystal Ship. I’m not sure what he likes.

After we open our presents, we argue about his being too wild when we play. He wrestles too god damned rough sometimes, today getting me into a hammerlock and flipping me on my back. Something snaps–my back hurts like hell.

"Shut up, bitch, stop your squawking."

We exchange more words. Don’t I have the right not to be injured?

Stoney has an unfair advantage.

I think he understands; he apologizes, anyway, promising not to be so rough. We’ll see.

We go to bed early and make love, and rap about our acid trips.

Weird. I thought we had connected last night, but we didn’t, not really. We were on separate trips.

For me, it was so much more.

Index/Table of Contents
Posted by Jennifer at 4:35 PM