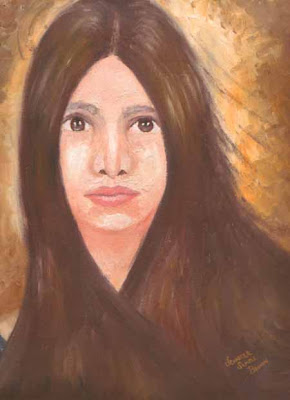 Thank you for forwarding the appropriate forms to me for my signature. I’m not quite sure how extensively my records were kept (I was a patient only from February through April 1969, and I was not on any drug protocol), so I’m not quite sure exactly what I need in terms of records. Of course, I would want to know my intake case history, diagnosis (beginning, on-going, and ending), specific tests performed (mental and physical) and their results, progress reports and plans, physical status, exit case history, etc.

I also have one question that has been unclear to me for the past 33 years: who signed me in? In other words, who decided that I should be admitted?

I understand the costs involved, and so I look forward to your e-mailing me at__________with this information.

Again, thank you for your help.

As she read over her records, she was struck by two realities: (1) how much she has forgotten about that time and (2) how the records themselves seem trivial (at least from an outsider’s viewpoint) and repetitive, as if the hospital staff were somehow baffled by the girl’s presence. It was almost as if she did not fit into any of their prescribed slots. She wasn’t a psychopath, a manic-depressive, a depressive, a catatonic, a criminal, an incompetent; furthermore, her records suggest that if she were depressed, it was situational, not something innate within herself.

Jennifer’s doctor, in his assessment notes, says, “This patient was referred by the police matron in Sioux City because of use of drugs and paranoid feelings about family.”

Jennifer recalled why she felt paranoid about her family. Her grandparents, who had adopted when she was nine, lured her back to Sioux City, where they confiscated her mail, monitored her phone calls, and limited her contact with friends who did not pass their rigorous standards. The girl’s initial summary continues, “The patient is relatively free of hostility, except for the anger she feels toward her grandparents in response to their lack of understanding and sympathy, and their inclination to be over-directive and over-restrictive.”

In her psychological testing evaluation, her lack of diagnosis seems to be confirmed: Jennifer “is apparently not particularly subjectively uncomfortable, neither manifestly anxious nor depressed. She has a mild self image problem which is both derivative of and productive of construction of social relationships.” On the other hand, the evaluation from her WAIS, HTP, RIS, MMPI, and Rorschach tests reveals that she manifested some “mild acting out tendencies which is consistent with past behavior. It is probable that the inclination to conflict with social convention will persist but genuine anti-social behavior is contraindicated.”

While the psychological tests may have offered some insights to her personality traits, Jennifer did not reveal much information to her doctor at Cherokee. She remembers deciding that she would keep a low profile and reveal minimal information about her background. In the initial summary, under “Mental Trend and Content of Thought,” the report notes, “...she could not remember anything about her true parents.” Jennifer, however, did remember her parents, particularly her mother, an alcoholic who would get into violent fights with her stepfather.

It is true that she barely knew Robert C., her natural father, although, to this day, she has a letter from him to her grandparents, dated August 9, 1952, in which he explains why he and her mother should make their separation permanent. She almost feels sorry for him.

Jennifer may have revealed more than she recalled. Still, she felt that they could not keep her in the institution if she did not reveal too much about her past, for example, an incident with an older boy when she was eight. This was to be a secret to be kept inside until much later in life. However, the section under “Summary and Evaluation” hints that perhaps Jennifer did confide in Dr. Favis, her psychiatrist: “The patient had several traumatic experiences in her earlier life...” but Dr. Favis does not go into any specific detail, other than to reiterate her mother’s several marriages, divorces, and chronic alcoholism.

Her records do suggest a reticence to talk freely. She remembered babbling a lot during her therapy session, even enjoying them, but not saying much of substance. She would talk about Jeff (noted erroneously as “Don” in her records), her plans to head to the east coast, have some fun, perhaps get a job, get married, have children–pretty much live an ordinary life. She certainly didn’t accomplish much head work in those sessions.

Jennifer asked Dr. Favis not to put her on any medication. When he asked why, she said, “I’m in here because of drugs; why would you want to give me more drugs?”

Jennifer knew then that at least one person in this godforsaken place listened to her, thought what she had to say was important. The truth was, she had seen how lethargic the other patients were and didn’t want to be logy like them; she wanted to stay up late at night to write letters, watch T.V., and think without having to deal with the other patients. Whatever drugs they prescribed knocked patients out by 8:00-8:30, and with the exception of the ward clerk, a girl about her own age, she had the ward to herself.

Perhaps Jennifer harbored a natural aversion to psychiatric drugs, given her own psychedelic experiences, some of which had been frightening. The research reveals that Jennifer had reason to be afraid, for mental institutions were still places were problematic people were warehoused and drugged. In 1954, the drug Thorazine, a drug she recalls being mentioned by other patients, was embraced by mental hospitals all over the world because of its profound tranquilizing effects (Psychiatric Drugs: Thorazine)

Other drugs prescribed then included antidepressants, such as iproniazid (an MAOI developed in 1956), imipramine (a tricylcic anti-depressant), valproic acid and carbamazepine (both mood stablizers), and ibogaine (for withdrawal symptoms). Lithium, of course, was an old standby (Psychiatric Drug).

Dr. Favis agreed not to prescribe drugs; perhaps he had already come to that conclusion himself, given that she was designated as a screening center patient (which she did not know at the time). Her records suggest a fairly normal 18-year-old girl with some self-image problems and anger issues, but not someone who would benefit from the psychiatric drugs of the day. 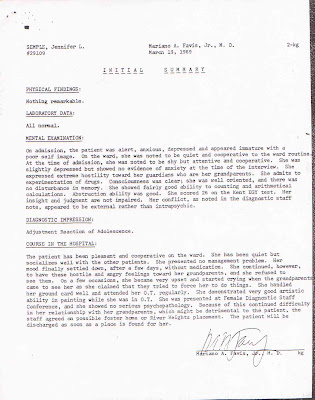 During O.T., she completed at least two oil paintings: a representation of Melanie Wilkes from Gone with the Wind, and an old man who looked somewhat like her grandfather. She kept the Melanie portrait–which she still has (see the photo at the beginning of this post)–a waif-like creature who resembled more of a flower child than a southern belle from a historical novel. She gave the old man, who featured some clown characteristics, to Dr. Favis as a thank-you present.

Other than his kindness, Jennifer doesn’t remember much about Dr. Favis, even his first name. According to her letters, he was Filipino. Perhaps he was Asian, but he may have been Latino–he spoke with an accent. He was short, thin, with horned-rimmed glasses, and a mass of straight shiny, thick hair, and a sallow complexion. She never saw him without his white coat. This memory may or may not be an accurate one, but this is what she remembers about him. In 2002, she learned from her records his full name: Mariano A. Favis, Jr., M.D.

When Jennifer Googled him by his full name, she found nothing. A current urban legend says that if a person does not appear on Google, he or she does not exist, but, surely, a man of Dr. Favis’ caliber would be everywhere. She tried his first initials, which is standard publication protocol in the sciences and found one relevant entry: a 1978 letter to the editor in the American Journal of Psychiatry, titled “Psychopathology of the Team Concept.” (135: 1117-1118). Of course, he must have done his most important work before the web.

As Jennifer delved deeper into the letters, she experienced an epiphany: Dr. Favis was probably one of the most important people of her life. He literally held her fate in his hands, and he could have abused that power. Jennifer was not an easy patient; she often acted up and out, sometimes playing annoying pranks, other times mouthing off to the staff. She often refused to get up in the morning, skipped O.T., and consistently challenged him, social workers, and nurses. She was often “written up” by the staff. Yet none of her records reveal any of those things. Perhaps he understood that she didn’t belong there, and he wasn’t about to prolong her stay just because she was acting “adolescent.”

She wonders where he might be now, and where he went after Cherokee, and, more important, why Cherokee in the first place. She would to think that it was providence that had sent him to this place. But, she knows better; even she isn’t that egocentric.

Does he even still remember her?

"Snippets Here and There" is copyright 2008, by Jennifer Semple Siegel.

Index/Table of Contents
Posted by Jennifer at 7:39 PM