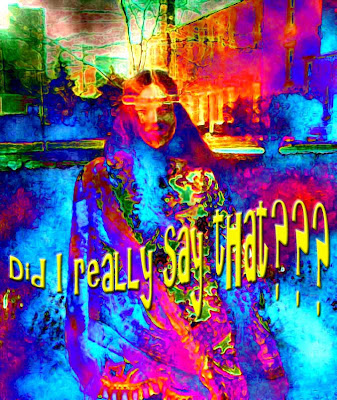 This is just a cautionary tale for all writers who are thinking about writing a memoir.
Posted by Jennifer at 11:14 AM No comments: 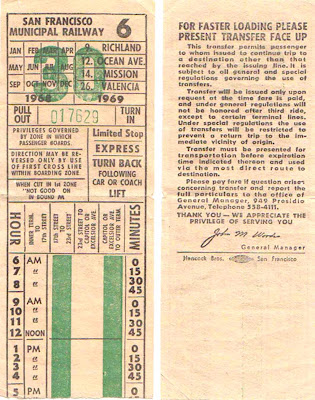 I can't believe that I saved this old bus transfer from San Francisco and still have it, but here it is, photo of front and back.

I remember my late 1968 trip to San Francisco, but I don't remember riding the bus, although I do recall that construction was going on for BART.

I couldn't believe that the city was actually building a subway in an earthquake zone.

Stoney and I had hitchhiked to San Francisco from Los Angeles; some kind truckers picked us up, so our trip (going and returning) was fast and easy. DISCLAIMER: I don't recommend hitchhiking at all, but Stoney and I were young and stupid, and we thought we were invincible.

What I remember most about this trip:

--We stayed in a "pad" that was painted a vivid purple and inhabited by a lot of "freaks" (term for hardcore hippies) who liked to party.

--I suppose the statute of limitations has run out by now, so I can admit this: Stoney had about 25 tabs of acid sewn into the lining of his jacket (Later, in early 1969, he made the same trip alone with 487 tabs sewn into his coat; I decided not to accompany him on that trip). To tell the truth, I was terrified we would be picked up by the police; in those days, being caught with drugs in any amount could have resulted in serious prison time. On my own, I would have never had anything to do with drug trafficking, but I, impressionable and naive, was in love with someone who had no problem with selling dope.

Not my best moment in life.

I was incredibly lucky in that I was given another chance to change my life without having to serve time in the big house. My involuntary commitment in Cherokee was peanuts compared to what could have been.

--I refused to take off my plastic go-go boots during the entire trip because my feet stunk, and I was embarrassed about it (Stinky feet have plagued me all my life, but I refrain from wearing footwear that doesn't allow my feet to breathe).

--At Haight-Ashbury, a stranger gave us brownies baked with marijuana, and we actually ate them. How stupid was that? Obviously, I lived to tell about it, but, still, eating anything offered by strangers is risky.

That's about it for memories of that infamous trip.

Who would think that an old bus transfer would stir up so many memories?
Posted by Jennifer at 10:45 AM No comments: