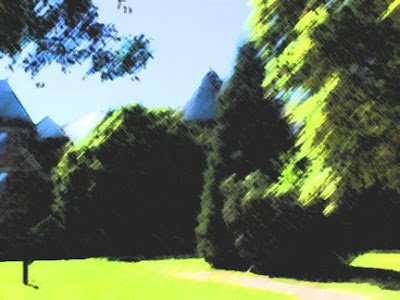 Primary Narrative Thread: Christmas Eve 1968 to May 1969. Although the prologue is from the perspective of my current persona–thus, past tense–the primary narrative thread (the bulk of the memoir), recreates Jennifer L. Semple’s 18-year-old voice through the present tense.

My goal: to place the reader in the middle of that volatile time and into the life of a rebellious teen.

I incorporate other narrative approaches as well:

Secondary Narrative Thread: August 18 through August 30, 2004. Beginning in Chapter Eleven, Jennifer’s youthful voice is interrupted by Jennifer the adult attempting to make sense of her past.

On August 18, 2004, as I ponder a return journey to Cherokee, I address some issues I have not really addressed in the primary thread: my relationship with Stoney, my drug-dealing boyfriend and my guilt over a "Dear John" letter I had written in November 1968 to a fiancé, a Marine stationed in Vietnam.

August 29: after experiencing some anxiety, I decide to make the journey to Cherokee to take pictures and remember.

August 30: I describe my return to Cherokee, Iowa, as a sort of catharsis. While there, I experience past emotions, feelings, visions, and smells. I also speculate about the current incarnation of Cherokee.

I also contemplate living abroad for the upcoming year (2004-2005) and reflect on the convention of letter-writing as a tenuous connection between long-distance lovers.

In terms of length, these passages are short interruptions but important in that they offer a distant perspective of my past and a glimpse of young Jennifer’s future.

Flashbacks to Fall 1968. Although these Hollywood events occur in close proximity to the primary narrative thread, the main focus of the memoir begins on Christmas Eve 1968. Yet, some revealing and important events have occurred before that time. These flashbacks, interspersed throughout the book, are written in the past tense because, for young Jennifer, they were well into the past.

For clarity, most of the Fall 1968 flashbacks have been afforded their own short chapters, which are interwoven contextually (thus, not necessarily in chronological order) throughout the primary narrative: Chapters Three, Nine, Fifteen, Seventeen, Nineteen, Twenty-Five, Twenty-Seven, Thirty-One, Thirty-Three, Thirty-Seven, Thirty-Nine, Forty-Two, Sixty-Five, Seventy-One, Seventy-Five, Eighty-One, and Eighty-Three.

Childhood Flashbacks. In addition, three flashbacks to my childhood, short italicized, present tense, dream-like passages, are included within the primary thread, not in their own chapters.

These passages include a near-death experience at age six (in Chapter Thirty-Four), my younger sister Robin being taken away from our family (in Chapter Forty-Six), and a nightmare, at age four, about bed-wetting and snakes (in Chapter Eighty-Four). These memories tie in with events occurring depicted in the primary thread.

Perspective of My Childhood Guardians. Harley D. Semple, my grandfather, passed away in 1974, Olive Semple, my grandmother, in 1987. Therefore, for their first person narratives, I have referred to interview summaries contained in my hospital records–interviews conducted and summarized by my psychiatrist (and other hospital personnel). I have also relied on my personal knowledge about these people who raised me. Their voices, which I have recreated, are what I remember.

These short present tense narratives have been placed in their own chapters.

During this time in my life, I was harsh and judgmental toward my grandparents; as an adult looking back, I owed them an opportunity to tell their side of my story.

Dramatization. In Chapter Fifty-Four, I have included a dramatized scenario between my grandfather and Opal Casey, the Sioux City police matron, as they draw up the papers required for my court hearing, ultimately resulting in my commitment. I based this dramatic scene on my actual court papers, in which my grandfather’s name, as "Informant," has been scratched out and replaced with Opal Casey’s name.