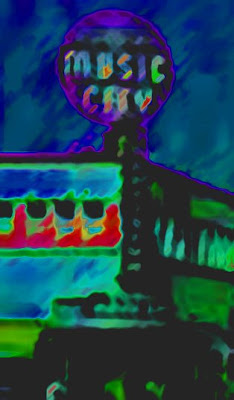 It was after eight, a crisp evening, and Rick was still missing.

Damn him . A total jerk.

I kicked at the ground, scuffing my shoes on the pavement. If he weren’t so cute...

“Hey, Eleanor, would you turn up your radio?” From my left, a male voice, not too deep, with a funny accent I’ve never heard before. I turned; a strange dude sat next to me, tapping his right foot, left foot on the wall, knee tucked under his chin. A homemade cardboard badge, with “Rent-a-Cop” written in Magic Marker, safety-pinned on his hat. He wore a plaid shirt, denim jacket, and bellbottoms, the outfit worn and ragged, the pants baggy. Long light brown hair, thin and a bit scraggly. Horned-rimmed glasses, thick lenses–probably almost blind without them.

Not too spectacular–not even a good pickup line.

“Oh. Sorry. But could you still turn up your radio?”

“It’s Eleanor’s radio,” I said, turning it up as loud as it would go.

“Hey Jude,” my favorite Beatles song, wafted out of the speaker.

Paul McCartney sings like an angel, and I don’t care if the lyrics are about shooting heroin, as some people seem to think.

“That’s why I thought you were Eleanor. I recognized the radio.” A kind smile, showing perfectly white teeth, but one front tooth slightly overlapping the other. He looked older, about 25. “So you’re Jennifer. I should have looked at the chick, not the radio.”

“No, not okay. Sorry about the mistaken identity. Call me ‘Virgil,’ but my real name is ‘Jeff.’” Maybe not so strange and definitely not a pervert. On the street, one never knows.

“Well, then. I’d better call you Virgil, because my family and friends back home call me ‘Jeff’ all the time. It’s been my nickname forever.”

He laughed. “So how does a girl get a boy’s nickname?”

“My cousin couldn’t say ‘Jennifer’; he called me ‘Jeffer,’ which got shortened to ‘Jeff.’ So I got stuck with it. How’d you get your nickname?”

“I made it up. I needed a street name, and I’m a Virgo. Seemed logical.”

We both cracked up, laughing at the silliness of it all.

Usually, I feel so awkward when meeting new people, but I felt totally comfortable around this guy.

Rick never showed up, but it didn’t matter; I had a groovy time rapping with Jeff; he was funny and smart. He’s from East Berlin, Pennsylvania, in L.A. only about a month, hitchhiking cross country because he wanted to see the world. Now he was homesick.

His birthday was a few weeks before mine. At first, I didn’t believe he was my age, but he showed me his driver’s license; he seemed so much older, but in a good way, not at all like Establishment. He lived on Hudson Street, where he rented a room from some chick who agreed to give him cheap rent in return for some babysitting. His favorite Beatle album: Sgt. Pepper, but The Magical Mystery Tour followed a close second.

Home
Index/Table of Contents
*
Posted by Jennifer at 3:33 PM