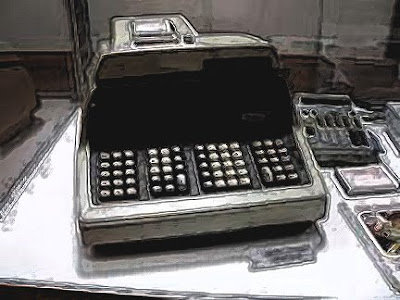 Today’s issue of Science advertises a new type of computer:

“The new Hewlett-Packard 9100A personal computer is ready, willing, and able...to relieve you of waiting to get on the big computer.” The $4,900 device, designed to sit on a desk top, weighs 40 pounds and is equipped with magnetic cards. This machine does scientific calculations.

The Hewlett-Packard 9100A is an early computer/calculator, first appearing in 1968. HP called it a desktop calculator because, as Bill Hewlett said, "If we had called it a computer, it would have been rejected by our customers' computer gurus because it didn't look like an IBM. We therefore decided to call it a calculator, and all such nonsense disappeared." An engineering triumph at the time, the logic circuit was produced without any integrated circuits, the assembly of the CPU having been entirely executed in discrete components. With CRT readout, magnetic card storage, and printer, the price was around $5000. 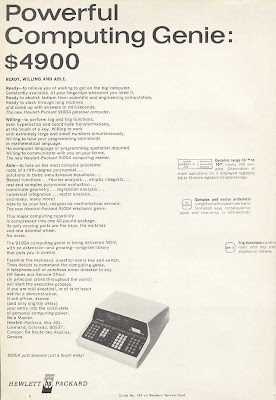 The 9100A was the first scientific calculator by the modern definition (i.e. trig, log/ln, and exponential functions), and was the beginning of Hewlett-Packard's long history of using reverse Polish notation entry on their calculators.