October 1, 1968: Night of the Living Dead Premieres in Pittsburgh 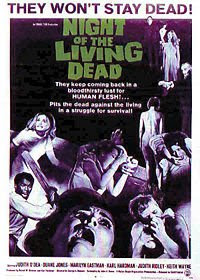 Night of the Living Dead (1968), directed by George Romero, is an independent black-and-white horror film. Early titles were: Monster Flick (draft script) and Night of Anubis and Night of the Flesh Eaters (production). Ben (Duane Jones) and Barbra (Judith O'Dea) are the protagonists of a story about the mysterious reanimation of the recently dead, and their efforts, along with five other people, to survive the night while trapped in a rural Pennsylvania farmhouse.

George Romero produced the film on a $114,000 budget, and after a decade of cinematic re-releases, it grossed some $12 million domestically and $30 million internationally. On its release in 1968, Night of the Living Dead was strongly criticized for its explicit content. In 1999, the Library of Congress registered it to the National Film Registry as a film deemed "historically, culturally or aesthetically important."

Home
Posted by Jennifer at 1:06 PM