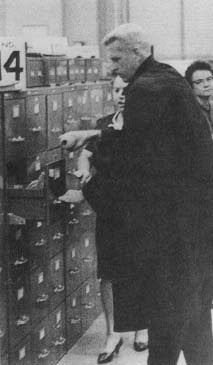 All nine members of The Catonsville Nine, a group of Catholic activists against the Vietnam War, were found guilty today of storming a Baltimore (Maryland) suburb Selective Service Office and burning over 10,000 files.

During the trial, which started on October 5,

Philip Berrigan testified that his moral opposition to the Vietnam War led him to participate in the Catonsville incident:

"We have been accused of arrogance, but what of the fantastic arrogance of our leaders? What of their crimes against the people, the poor and the powerless? Still, no court will try them, no jail will receive them. They live in righteousness. They will die in honor. For them we have one message, for those in whose manicured hands the power of the land lies. We say to them: lead us. Lead us in justice and there will be no need to break the law."

On May 17, 1968, nine people walked into a Selective Service Office, took hundreds of draft files from a cabinet, took them outside, doused them with homemade napalm and burned them in the name of peace.

The Catonsville Nine (Photos and Profiles):

Index/Table of Contents and News Clips
Posted by Jennifer at 9:52 PM